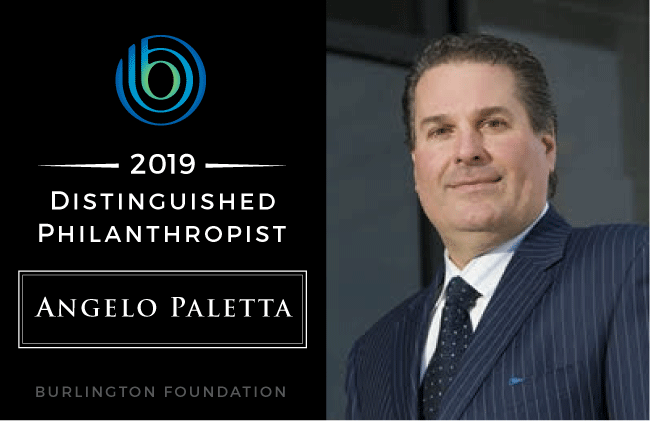 “Angelo Paletta has called Burlington home since 1964, and over those many years has contributed significantly to the growth and development of our great city. Angelo’s commitment to making our community a better place to live for everyone is always at the heart of his philanthropic endeavors,” says Colleen Mulholland, President and CEO, Burlington Foundation. “Angelo, who has supported our foundation for many years, also consistently demonstrates a passionate and generous commitment to many charitable needs and causes.”

Burlington Foundation’s Distinguished Philanthropist award presented by Canada Life offers an opportunity to publicly honour and thank a noted philanthropist for their positive and sustainable impact on Burlington and surrounding communities. Angelo and his family have a long history of sharing their time, talent and treasures.

Angelo’s philanthropic leadership is a tremendous part of his legacy that will forever be noted in Burlington’s history. While current contributions are too numerous to list, notable gifts have been made to the Carpenter Hospice expansion project, Joseph Brant Hospital’s New Era Campaign, the Joseph Brant Museums expansion, and Hamilton Health Sciences. Angelo continues to donate countless hours of leadership and funding to many critical needs in Burlington.

Angelo has also been honoured as a Knight of Malta-Order of St. John of Jerusalem, a Commander of the Order of the Ethiopian Lion from His Imperial Highness Prince Ermias Sahle-Selassie Haile-Selassie, and the Cavaliere (Knight) of the Order of St. Maurice and St. Lazzarus from the Duke of Savoy/Prince of Naples at the Vatican.

“I am extremely humbled and honoured to receive this award from Burlington Foundation during their milestone 20thanniversary year. My family and I are proud Burlingtonians, and I believe that we can all make a difference in the lives of community members in their time of need. As we all know simple gestures of giving, without expecting anything in return, often make the most significant differences. In accepting this honour, I hope it serves to encourage others to give what they can to support our growing community.”

We believe that the things you do for others remains your legacy. Here are our Distinguished Philanthropist selection criteria:

We are pleased to have recognized the following past Distinguished Philanthropists of the Year honourees: Don Smith, Kevin Brady, Doug Leggat, Murray and Diana Hogarth, Ralph and Susan Sgro, Gary DeGroote, Ron Joyce, Dr. Wally Pieczonka and Dorothy Borovich (scroll down to see our video tributes).

Distinguished Philanthropist of the Year Videos